Kid Icarus is a franchise that has its origins in the early days of Nintendo’s game consoles. It was released along side legendary names like Zelda and Metroid. The original NES title is one of the most classic games for the system, with one of the strangest reverse difficulty curves of any game I’ve ever played. The game begins wildly difficult, but then gets much easier as it goes on. It’s amazing what one or two power ups can help out with!

The game was popular enough to score a sequel on the Gameboy. But unlike Zelda and Metroid, the series faded into obscurity after that, barely receiving any form of mention from Nintendo for years to come. That is until series protagonist Pit became one of the first new fighters announced for Super Smash Bros Brawl.

While the character most likely came off as obscure for some, Pit’s place in Brawl seemed to help revitalize interest in the series. Eventually, the third Kid Icarus game came into existence over 20 years after the second. That third game was Kid Icarus: Uprising, interestingly developed by the Smash Bros creator himself, Masahiro Sakurai.

Uprising happens to be one of my favorite games on the 3DS. It added a whole new level of action and personality to the world and characters that the previous games were incapable of portraying. It’s an utterly fantastic experience, and I highly recommend it for anyone who hasn’t had the opportunity to play it! Though I guess me gushing over how much I love Uprising isn’t what you’re here for, right? We’re here to talk about Smash!

Sakurai’s next major outing after Uprising was Super Smash Bros for 3DS and Wii U, and the Kid Icarus characters followed him to the new games. Goddess of Light Palutena became a playable fighter, and Pit received an Echo Fighter in the form of Dark Pit. But as far as Smash Bros Ultimate goes, there’s no new Kid Icarus fighters in the base game.

As far as who could be added to Smash, a lot of people are behind the inclusion of Medusa. She is, after all, the original villain of the original game, and could become either an original fighter or an Echo of Palutena. Personally, I was a big supporter of adding Magnus to the roster in Smash 4, even though he ended up as an assist trophy in that game. He is noticeably absent from his assist duties in Smash Ultimate, however. Perhaps this means he could be heading our way in the form of DLC? It’s something to be considered.

But I’m not going to be talking about either of these potential fighters. While they would both be great choices, and I would be excited to see either of them enter the fray, I thought of a Kid Icarus character that would make an even better addition!

It’s the God of Death himself, the villainous (and incredibly goofy) THANATOS! 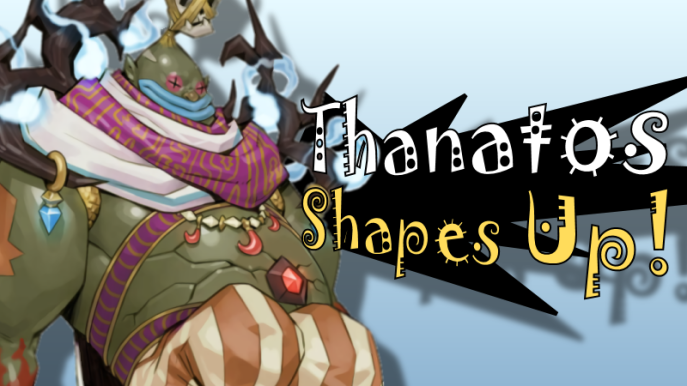 In the original Kid Icarus, Thanatos was nothing more than a throw-away enemy, portrayed as a big snake that took part in the final battle with Medusa. But in Uprising, he was re-imagined into the shape-shifting, genie-like form you see in the picture above (even though he was still a minor villain, in the grand scheme of things).

And yup, you read that correctly: He’s a shape-shifter. As in he can turn into whatever he wants. In the Kid Icarus games, he’s taken the form of the above mentioned snake, a bat, a sword, and a… foot? Yeah, a giant foot. And that’s just a few examples of Thanatos’ strength. Considering he can take the form of anything he desires, that can lead to limitless potential for a Smash Bros moveset!

He could take the form of other Kid Icarus villains and monsters in order to use their attacks, or change his limbs and body into any number of different weapons and objects. There’s really no end to how creative they could be when coming up with a fighting style for him. He’s a character that you could basically do whatever you want with, and no matter how goofy you make his attacks, it would fit his eccentric personality perfectly. Thanatos truly provides a chance to make a unique fighter like no other!

For his Final Smash, why not have him change into his original incarnation: a giant serpent that takes a bite out of the opposition! And seeing that he is the God of Death, it would make sense for this to potentially lead to a instant KO.

True, trying to find a satisfying way to make a character that can become ANYTHING might be trickier than it sounds. There’s so many directions you could take the character, it could be challenging to find the perfect balance of making him creative, fun to play as, and not overpowered. But all the same, I think he would be a perfect, unexpected entrant in the Smash series! Thanatos may not be a major threat in the Kid Icarus games themselves, but he certainly has the potential to become a fantastic Smash Bros combatant!

So whaddya think of my choice? Is Thanatos the perfect Kid Icarus entrant, or would you rather have a more notable character make an appearance? Be sure to let me know through a comment or two! I’d love to hear what you think.

But for now, that’s all from me. Sparky is signing off for now! I’ll catch you later.