I. Freaking. Love. Super Smash Bros. Ever since I first saw that glorious commercial for the original game on Nintendo 64, I knew I was in for something amazing. To this day, Super Smash Bros remains my favorite video game series, and each game just keeps getting better.

To many gamer’s surprise, Nintendo announced the return of the series on the Nintendo Switch almost out of nowhere the other day. Everyone knew it was going to happen at some point, but I don’t think anyone expected an announcement for a Smash Bros game to happen before E3. The trailer was just a small teaser, and didn’t tell us much, aside from the addition of the Splatoon Inklings to the character roster. But regardless, it was enough to get the hype train rolling once more, and get everyone speculating about who’s going to make the cut in Nintendo’s next huge crossover fighting game.

So I’m starting off what I’m calling the Smash Bros Character Checklist, where I talk about characters I would like to see join the battle! I’m going to be going through the existing represented Nintendo games, series by series, and discussing who I think from that series would make a good addition to the cast. These aren’t going to be detailed analyses of what the character’s complete move-sets would be or anything; just my general thoughts on what the characters would play like, and why I think they should be included in the game. And starting us off, of course, is the Mario series.

Now, the main series Mario titles already have plenty of representation in the Smash Bros titles. There’s Mario and his Doctor counterpart, his brother Luigi, the lovely Princess Peach, and Mario Galaxy’s Rosalina. We also can’t forget the big baddie Bowser and his son, Bowser Jr. If you count the fact that the seven Koopalings also serve as Bowser Jr’s alternate costumes, that brings the total Mario characters up to fourteen. I think most agree that the Mario series has plenty of representation at this point, so adding more characters almost seems a bit silly.

But… there’s someone missing, isn’t there? A main series Mario character, often playable in games, that isn’t among the other main characters? Why, it’s Toad of course! It seems strange to have every other Mario character under the sun, and not include one of the longest running characters in the series as a Smash fighter. Though there is the small problem that Toad serves as one of Princess Peach’s special moves. So why not make the playable Toad a different Toad? Make it… Captain Toad! 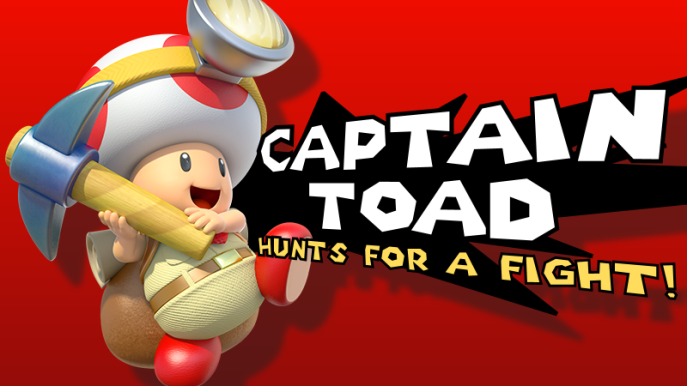 Starting off as a minor supporting roll in Super Mario Galaxy, Captain Toad and the Toad Brigade grew into characters of their own. The sometimes cowardly treasure hunter is now a mainstay of the series, with his own title game that’s soon going to be re-released on the Nintendo Switch. He would be a perfect fit to represent his Toad brethren in a new Smash Bros!

Like other playable Toads before him, I envision Captain Toad as a quick character with a good deal of strength behind his attacks. Though he would most likely sport the poor jumping ability of other Toads as well. Considering he doesn’t have a jump button at all in his game, maybe he should invest in a smaller backpack for his Smash Bros debut?

He would be a lot like Little Mac in a way. But in order to differentiate him from the small-stature boxer, Captain Toad would sport an arsenal of tools from his treasure hunting expeditions. He would have his pickaxe handy for Smash Attacks, and he could even borrow Princess Peach’s vegetable-picking attack for his Down-B Special (perhaps he could occasionally unearth heavy treasures, instead of vegetables, in order to deal extra damage?). The Captain could even make use of his headlamp for a Neutral-B Special, charging the light up to temporarily blind his opponents.

His alternate costumes would be easy to come up with: give him colors representing the other members of the Toad Brigade! He could even have an alternate costume that turns him into Toadette, similar to the gender-swapped costumes of Robin, Corrin, and Wii Fit Trainer. That way you could have another character added to the game, without taking up a spot in the character roster. Plus it would add to the number of female characters in the game as a whole.

Overall, I think Captain Toad would be the perfect choice to fill in what feels like a large hole in the cast of Mario characters represented in Super Smash Bros. He can be a modern AND classic Nintendo character rolled into one! Here’s hoping the development team feels the same way as I do. I’d love to see him make it in!

So what does everyone else think of my choice? Would Captain Toad make a good Mario representative, or do you have another character in mind? I hear that Paper Mario is a popular choice, and there’s always characters like Princess Daisy and Waluigi (though would Waluigi count as a Wario series character? That’s something to think about…). Either way, tell me what you think! I’d love to hear fellow Smash-Fan’s thoughts on the matter!

I’m planning to continue the Smash Bros Character Checklist in the future, so be sure to look out for posts on other characters and franchises I think would be a perfect fit for Super Smash Bros!  Until then, keep on playing! Sparky is signing off for now.

One thought on “Smash Bros Character Checklist: The Mario Series”